Article compliments of ReVision Energy and written by Fred Greenhalgh. 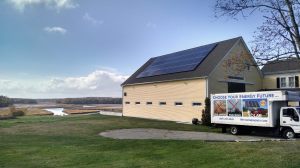 Expanding New England’s natural gas infrastructure has been hailed as a panacea to our energy woes. We question whether New England’s energy problems are so easily solved.

It is incredibly expensive (upwards of $1 million/mile) to build out natural gas infrastructure, and the amount of capacity required to make a substantial impact is well beyond what the private market will support.

Many politicians are suggesting, instead, that the cost to build out gas infrastructure be passed on to electric ratepayers, with the idea that, long-term, the costs would be recouped through the neutralization of winter price spikes.

We – and we are not alone in this – find this logic flawed, and unlikely to actually resolve the long-term energy problems of Northern New England. In our opinion, it is inequitable to pass the cost of pipeline expansion (most of which will not even be in the state of Maine, and instead, benefit Massachusetts power generators) onto the people of Maine and New Hampshire, who are already contending with high costs of electricity.

Instead, we should accept the reality of our geography, and make infrastructure improvements that offset load and generate clean energy to provide lasting long-term savings and protect our environment.

We need only look at our use of heating oil to see an example of how destructive it can be when we are dependent on a single energy source. While natural gas looks good today, its long-term availability, price, and environmental record is highly suspect.

Yet, the sun continues to rise every morning without fail.

ReVision Energy’s phone has been ringing constantly over the last few weeks as news spreads about coming electricity price hikes in the Northeast – Unitil predicts a near doubling of the standard offer rate, as does Liberty Utilities and the New Hampshire Electric Co-op (PSNH’s customers are somewhat insulated from the hikes due to their ability to sell power from their aging coal power plants during winter months, but that is another story).

CMP business customers in Maine will seem similar price shocks, though residential consumers will be largely insulated from the price increases until March when the standard offer rate is renegotiated.

For affected utilities, a typical home consuming 500 kilowatt-hours per month will see an increase in the order of $37 per month (is it ironic that the Maine solar rebate was deemed “too expensive” when it would add $1 per year to a typical electric bill? Ah, but we digress).

To blame for these winter blues is a competition between the power and heating sectors for natural gas. While natural gas is plentiful down in Pennsylvania (in fact reaching record supplies in October – see EIA), it becomes in short supply when moving through the distribution system that gets it up to Northern New England.

By the time gas gets here, it is in high demand and soars in cost, as heating users (who have priority oversupply) compete with electric generators for the fuel. In the depths of winter, gas is in such short supply that electric generators need to instead source significantly more expensive fuels such as petroleum and coal, leading to these painful winter price spikes.

The Best of Times, the Worst of Times – A Story of Natural Gas

In Maine, the hydro and wind sector meets a large amount of our energy mix (40%), in New Hampshire, nuclear remains an important source (50%), and in Massachusetts, the lion’s share of the state’s electricity (60%+) comes from natural gas (data from EIA).

New England’s prices for natural gas are higher than anywhere else in the country does not necessarily make it less competitive, since the traditional alternatives – liquid fuels and coal – are worse.

But New England’s relationship with natural gas is starting to shift as the transition which has already happened in the electricity generation sector (liquid fuels to gas) is starting to occur in the area of home heating.

In Massachusetts, nearly half of all homes are heated with natural gas, in contrast to Maine, where roughly 5% of homes use natural gas (and fuel oil accounts for nearly 70%). However, the use of natural gas in Maine and New Hampshire is increasing rapidly, and the real problem occurs in the height of winter when extreme cold leaves natural gas heating consumers competing with generation plants for a limited natural gas resource.

In the worst cases, extreme scarcity leads to New England’s power generators being forced to consume alternate (and more expensive) fuels such as fuel oil, as was needed on 20 days during winter 2013-14.

OK, So Why Not Just Build More Pipeline?

Traditionally, natural gas pipeline expenditures have been financed by long-term contracts secured by gas local distribution companies (LDCs) which are a simple private market arrangement; one party agrees to make a long-term commitment to purchase capacity at an agreed-upon rate, and another party then funds the project.

Because the LDCs have pre-paid access to capacity, they get preferred access to the (limited) natural gas supply, whereas utility companies (who burn gas for electricity) have to purchase it at ‘spot’ rates set on a day-ahead basis. The spot price is dictated by available capacity left over from the heating sector, so, when the capacity left over gets scarce, the price goes up.

Utility companies are prohibited from entering into the same long-term contracts that LDCs enter into, and here enters the alternative proposal from the New England governors and ISO-NE (the operator of New England’s power grid) that a new way of funding natural gas pipeline – with public funds – be established.

Maine made headway on this front this past summer when its legislature passed LD 1187, An Act To Create the Maine Energy Cost Reduction Authority, which authorized the creation of a new state entity that would have bonding authority and the ability to enter into long-term natural gas contracts.

We find it worth noting that in October 2014, the staff of Maine’s PUC concluded that Maine electric ratepayers “shouldn’t be charged up to $75 million a year to help pay for natural gas pipeline expansion in New England … because the cost would exceed the potential benefits.”

Influencers in the energy space appear to agree with this conclusion. Power Options, the leading energy buying consortium in Massachusetts, concluded that the ISO-NE proposed tariff-design “is not designed in a fair or transparent manner” (See: An Expedient Solution to New England’s Natural Gas Constraints).

In other words, plenty of unbiased energy sector analysts find the proposed public financing of natural gas infrastructure unwarranted from a pure cost/benefit point of view. We agree, especially as the LePage administration has said it will not “pick winners and losers” (Bangor Daily News). We find the idea of subsidizing natural gas pipelines with ratepayer money a pretty clear example of picking winners.

The Fundamentals of Natural Gas

So let’s assume for a moment that Maine and New Hampshire did invest hundreds of millions of dollars raised on the backs of ratepayers to upgrade our natural gas infrastructure. Would that solve all our problems in the long term? To answer this question, let’s look at what is really happening in the natural gas boom.

Carl Pope makes a compelling case for how domestically-produced oil and gas could be kept in America and used to spur American manufacturing and clean up our transportation sector.

But this is not what’s happening. Instead, the shale gas industry is working hard to liquify natural gas and send it to the export market, a move that will inevitably cause the price for US natural gas to increase dramatically, even in the regions where the distribution of natural gas is abundant.

Much of the argument for allowing natural gas exports is based on optimism about how much natural gas can be accessed economically through fracking; other experts contend that the amount of economically-viable shale gas is much smaller than what the industry suggests and that we may experience significant drops in supply in as little as 3-5 years.

ReVision Energy cannot foretell the future, but we ask you to follow our logic:

Leading us to ask:

We believe that Northern New England can, and should, do better than to believe in this myth of cheap natural gas. This natural gas myth simplifies a complicated story about energy prices in New England and makes it easier to neglect the real, roll-up-your-sleeves, hard work that needs to be done: radically transforming our energy sector from one dependent on non-renewable sources, of which not a drop (or therm) is within our borders, to one powered by the abundant natural resources of our own region.

Solar panels have decreased in price by over 75% in the last ten years, driven not by government subsidies, but by competition in the free market. As much solar was installed in the last 18 months as was installed in the previous 30 years in the USA, and industry analysts project that US solar installations will double again by the end of next year.

The economic returns of solar PV are so predictable that it has attracted large scale investors as diverse as Google and JPMorgan. In October, “Deutschebank issued a report stating that solar will reach grid parity in 36 of fifty US states by 2016″ (Energy Policy Forum). National player SolarCity recently announced 4% bonds for small investors. The solar market is ramping up in a big way.

Visualizing the Rapid Growth to a Solar Future

The Dawn of Solar

Today, you can invest in solar and expect a 25-year cost of electricity of around 8-10 cents/kilowatt-hour. That is less than half of what Unitil will be charging this winter for electricity. Once you’ve made that investment, you will either never pay for electricity again (assuming your use is the same over time), or you will be paying off a fixed-rate solar loan until your 12-year term is up.

If you want to further leverage your solar array, convert to an electric heat pump heating system or electric car, and you can finance the whole package. Ditch the promises of future price decreases and instead grab a fixed-price for energy today, all while reducing or eliminating your carbon footprint.

So, this is the decision we face as individuals, and as the New England community: we can gather the rich energy resources in our region and power our homes, businesses, and institutions, garnering true energy independence and cleaning up our electric grid.

Or, we can make extremely expensive investments in infrastructure that will make natural gas investors rich, give us no certainty of price protection over time, and encourage more environmental destruction through fracking.

We do not feel it’s responsible to spend millions of dollars and hope for the best. Instead, we encourage you to ‘vote with your dollars’ – if you’re sick of paying for high electricity rates and ridiculous heating bills, look at what solar can offer.

If you’re a satisfied solar customer, tell your friends, neighbors, and perhaps, more importantly, your politicians. Our region is at a critical juncture – invest deeply in uncertain mythology, or have the bravery to redefine our energy supply, shuck the chains of the global markets, and enjoy independence and a healthier environment.

Article compliments of ReVision Energy and written by Fred Greenhalgh.